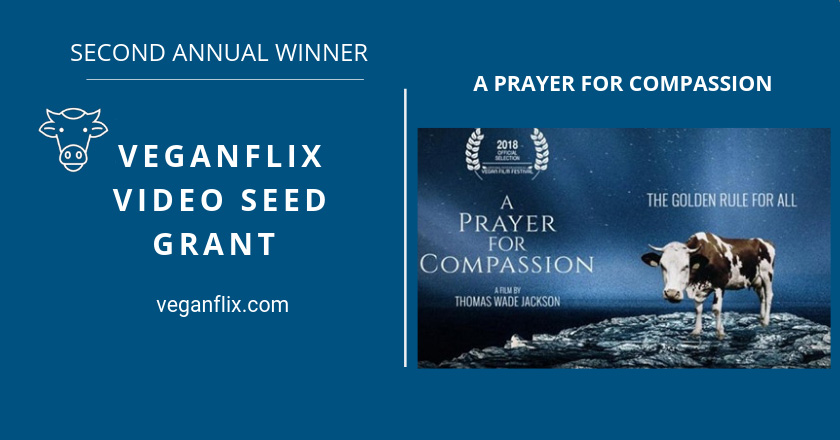 VeganFlix had the opportunity to ask filmmaker Thomas Jackson and producer Victoria Moran about their film in progress entitled A Prayer For Compassion.  This project was one of two recipients of the  Second Annual VeganFlix Video Seed Grant.

To see our interview with filmmaker Chris Delforce  of the other winning film, DOMINION, please Click Here

Congratulations Thomas and Victoria! We can’t wait to see A Prayer For Compassion!

VF-To start, How do you think the majority of people will react to this documentary? Do you think there will be more resistance (with potential acceptance afterward) or acceptance and understanding right away?

Victoria Moran (VM)  I think shock will be the response of the average person because, as familiar as we vegans are with the reality of animal abuse, the connection between animal agriculture and climate change, and so forth, these are brand new concepts for most people. They’re also concepts that go against what most of us learned growing up from such salient authority figures as parents, teachers, physicians, media, the government and, particularly relevant to the target audience for our film, religious institutions. I see our biggest challenge, as Thomas continues the editing process, is to be sure that the film is sufficiently mainstream, that we’re presenting only one really challenging idea, going vegan. We want the message to be: ‘You don’t have to become somebody else. We’re not out to change you, only to help you live more deeply the values you already hold.’

VF-How did you come across the vegans who are part of various faith traditions to interview for this film?

VM-Thomas brought me on as producer largely because of my longevity in the vegan movement and my many friends within that movement. I was directly instrumental in connecting Thomas with interview subjects including Dr. Will Tuttle (The World Peace Diet), Pramoda Chitrabanhu (Jain teacher and writer), Suzy Welch (Today Show regular, evangelical Christian, and vegan), Bob Isaacson (Dharma Voices for Animals), and Sailesh Rao (ClimateHealers.org), who joined us as an executive producer. These contacts sparked others, many of whom Thomas met at the National Animal Rights Conference in 2016. As a result, he has come up with a remarkable ‘cast’ representing many religious traditions and cultures.

VF-Where did the idea of creating this documentary come from? Was it an instant “this is something I need to do” or was it something that came about after months of thought?

Thomas Jackson (TM)-The idea for A Prayer for Compassion was born out of an actual prayer and through meditation. My daughter was 2 years old when I saw Cowspiracy at a local screening when it was first released. Though I’d been vegan nearly a decade at that time, I was very ignorant about the devastation animal agriculture had on the environment. Before my daughter was born, my philosophy had been to ‘live and let live’ and try to be a good example.

After Cowspiracy, I realized my motto needed to change to ‘live and wake up’ – to wake people up to the effects their choices are having on the planet and the other earthlings they share it with. So I prayed and asked what could I do to help make a better world for my daughter and those yet to arrive. Then I started to meditate and listen for an answer.

Suddenly, a question popped in my mind that I’d had when I first became vegan, when I’d go to brunch with people from my church: ‘I wonder how it’s possible that the same ministers and chaplains who are teaching me about kindness and compassion for all creation, don’t apply that same grace to the beings they’re eating?’ That question had not been answered and was still relevant.

The very next thought I had was to make a documentary about spirituality and veganism, which would explore that question. Immediately I thought ‘no way, you got the wrong guy’. I’m a filmmaker. I know how much time, money and work goes into making a film like this. Besides, at that time, I could count the number of vegans I had ever met on one hand and have a few fingers to spare. On top of that, I was a single father with joint custody, caring for a 2-year-old. But the still quiet voice wouldn’t let it go and I finally said okay, what’s the first step? And as clear as day I knew I was to contact Victoria Moran, who I had met once years before when she spoke at my church. I’d recently discovered her Main Street Vegan podcast and the amazing guests she interviews. I knew that I needed to reach out and ask her to be a producer and to introduce me to Dr. Will Tuttle and a few of the other spiritually focused guests I’d heard on her show.

Since then, it’s been about showing up, meditating, and saying yes to that still quiet voice, even when I can’t see how I’ll ever accomplish some of the things I feel it’s guiding me to do.

VF-Since this documentary is mostly targeted towards people who follow different faiths and religions, how do you plan on reaching these specific people and spreading the word about this documentary?

VM-I see A Prayer for Compassion spreading like wild fire, precisely because it has a target audience, people of faith. Although we’ll certainly leave no stone unturned in reaching out to festivals, going for theatrical release, Netflix, and the like, the fact is, there are 384,000 churches in the U.S. — plus synagogues, mosques, ashrams, and more. If we can simply arrange for vegans who are part of these congregations to share the film with their fellow worshippers, this will present the vegan message to thousands of people, not just as a generic dietary or cause-oriented suggestion, but in a way that is relevant to these men and woman as people of faith.

VF-What is/was the hardest part of making this documentary?

TJ-The hardest part has been learning to trust that if I continue to focus on doing the work of making the film, whatever is needed will show up, usually just in the nick of time. Whether it’s paying a bill, the direction of the edit or having the funds to fly to India and Morocco, if I keep saying yes to that still quiet voice inside, and doing the work, whatever is needed arrives — not always in the way I might imagine or wish for it to, but in a way that takes me a little further along the magical journey of making this film.

VM-I know Thomas has vast plans. For me, I’m looking at the release and marketing aspects ahead. I come from the book world and this is my first association with the production and distribution of a film, so I know I’ll learn a lot. Throughout this process, having the right person show up at the right time has happened pretty consistently, and I trust that more of these ‘right people’ will come forward as the time for distribution and publicity approaches. Looking further down the road for me — Thomas may well be a part of this, too — is that I have a screenplay for a family feature film, cowritten by my husband, William Melton, and myself, called Miss Liberty. She’s a fictional cow who escapes from a slaughterhouse. Funding a feature is a different universe from funding a documentary, but Miss Libertyis a powerful and beautiful story that deserves to be seen and play its part in changing the world, just as we’re convinced A Prayer for Compassion will do.

TJ-I’ve already shot a little footage here and there for a follow-up documentary which is about ‘bringing the elixir home’ – i.e. taking the lessons learned from the journey and applying them through a 30-Day Compassionate Living Challenge. This involves not only eating a healthful, whole-foods plant-based diet, but also exercise, meditation and reflection upon the teachings of compassion at the heart of each individual’s spiritual path. In addition, there is education about how to use the choices we make every day to be more compassionate, not only to the planet and our fellow earthlings, but to the person to whom many of show the least compassion, ourselves. The film will also feature a few organizations and individuals that are inspiring examples of aligning our lives, purpose, and occupations with our core values of compassion and kindness. Ultimately, I would like it to be an entertaining guide for how we can use compassion and the power of our choices to create the change we would like to see in the world.

I’m also hoping to have the opportunity to return to my narrative filmmaking roots and direct William and Victoria’s beautiful screenplay, Miss Liberty, as well as a couple of ideas I have for narrative films that also feature vegan characters and themes.

Thanks Victoria and Thomas! We eagerly await your film!

Thomas Jackson, FIlmmaker of A Prayer For Compassion

Previous
Dominion: Interview with VeganFlix Video Seed Grant Winner Chris Delforce
Next
What is a Vegan Film and Why Do They Matter?