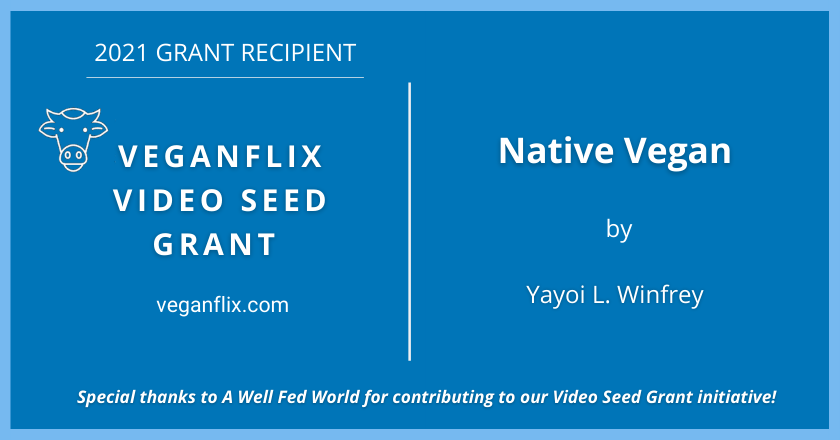 We at VeganFlix had the true pleasure of connecting with Yayoi L. Winfrey to discuss her upcoming video project. Yayoi is among the 2021 recipients of our VeganFlix Video Seed Grant, and we are so happy to be able to support her work. Stay tuned, and as always, thank you for visiting VeganFlix!

VF: Thanks so much for taking the time to speak with us Yayoi! We’d love to know more about your video/story theme.

YW: My video will explore the history of being vegan as it applies to Indigenous populations. Were there ancient cultures that initially lived vegan lifestyles, only to be forced to change their diets due to colonization by invading outsiders?

I’d like to examine a wide range of people and regions, but that might be overwhelming to begin with. So, I’m going to focus on Natives in North America and Hawai’i.

I’ve read that North American Indigenous tribes didn’t have access to firearms, nor did they domesticate horses until Europeans arrived. That would have made it very difficult for them to hunt for meat—if at all. It’s been reported that the Chocktaw were 100% vegan.

And, of course, it was the various Indigenous tribes that provided the first colonizers with bountiful produce grown and harvested by their people who’d been farming in North America for hundreds of years.

In Hawai’i, Kanaka Maoli, or Native Hawaiians, have the worst health issues in the islands. What happened in the 200 plus years since Captain Cook first occupied their kingdom? How did Hawaiians go from being an agrarian society to becoming consumers of processed fast food? And, how did Spam, a canned commodity created for the U.S. military, become the featured fare of Hawai’i with its lush tropical farmlands?

These are some of the questions I hope to answer in my video through interviews, archival footage and photos, and some animation.

VF: How did this idea come to you?

YW: The media has perpetuated the idea of being vegan as a trend started by and belonging to youthful, white, hip westerners eating organic dishes in upscale restaurants. In much the same way, the spiritual practice of yoga began in India centuries ago, but has been hijacked by Americans and presented as an “exercise” for youthful, white, hip westerners in fashionable sports attire.

Being vegan is nothing new to certain People of Color. There are many who don’t eat, or have not eaten, animals for religious or health reasons. Jainism and Hinduism in India are spiritual practices whose followers eat no, or very little, meat; while Siddhartha (Buddha), born in the 6th century, refused to harm any animal. It’s even been said that doufu (tofu) was created by a Chinese Emperor during the Han Dynasty 2,000 years ago. Further, the Rastafarian movement began among black Jamaicans in 1930.

VF: What are your current and/or future filmmaking goals?

YW: I love making films and have done so since I was a teenager. I don’t plan to ever stop! Every script I’ve written addresses issues of ethnicity and culture, especially what it means to be mixed-race like myself. And, I always include at least one vegan character in my screenplays who convinces a meat eater to change their diet.

Some movies that are on my slate include: a feature narrative, Watermelon Sushi, as well as a documentary and graphic novel about my Japanese war bride mother.

Thank you, VeganFlix, for honoring me with this seed grant!

Thank you so much Yayoi! Your project is wonderful and incredibly important. We can’t wait to hear how everything is going!