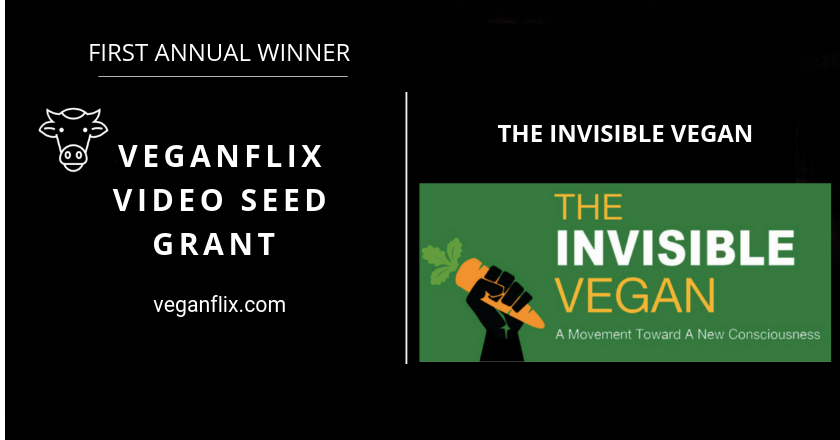 We are pleased to announce that Jasmine Leyva, filmmaker of the Invisible Vegan is the recipient of our very first VeganFlix Video Seed Grant!

VeganFlix got the chance to ask Jasmine a few questions about the Invisable Vegan so check out what she had to say below!

VF-For those who haven’t heard about your film The Invisible Vegan can you give us a description of the theme/story and how you got started?

JL-The Invisible Vegan is a 90-minute independent documentary that explores the problem of unhealthy dietary patterns in the African-American community, foregrounding the health and wellness possibilities enabled by plant-based vegan diets and lifestyle choices.  This documentary offers both historical and contemporary perspectives on the dietary trends among African-Americans, and shows how intertwined histories of slavery, twentieth-century socioeconomic inequalities, and the rise of Big Food, have led to the increased consumption and dependence on meat, processed, junk, and fast food. Inspired by Ralph Ellison’s 1952 firsthand account of alienation as an African-American in The Invisible Man, the title of this documentary evokes the ways in which prevailing attitudes and stereotypes about veganism within the African-American community have rendered the benefits of this lifestyle invisible within spheres of popular culture, social experience, and political debate. As the first film of its kind, this project therefore seeks to redress this invisibility by spotlighting alternative and ongoing efforts to raise awareness about veganism on the part of a committed group of food and nutrition activists.

How I got started:

Once I got the idea for the documentary, I started reading articles and books on veganism and African American foodways.  Then, I bought some equipment and started reaching out to people for interviews.  Before Invisible Vegan, I worked on a documentary series, so since i was familiar with the process, I was able to hit the ground running almost immediately after I came up with the idea.

VF-Can you tell us about a favorite experience filming the Invisible Vegan so far?

JL-One random Tuesday, I typed ferociously to get through a herd of emails regarding The Invisible Vegan.  Then, after responding to the 17th email with more to go, I stopped, took in the moment and smiled.  Working in TV production, I am all too familiar with being a slave to emails, but this particular time, every answered email progressed my dream, not somebody else’s.  It was liberating in a nuanced kind of way.

VF-What else do you do in your life besides making your film?

JL-On Wednesday’s I go salsa dancing.  On the weekends, I do volunteer work for Kidsave, an organization that advocates for at risk youth in group or foster homes.  On any given day, I work as an actress.  I’ve done commercials and print work for major brands like Nissan, Sony, Apple, American Express and more; a show for Lifetime and I am currently starring in my first feature length indie film.  GULP.

VF-Would you share your reasons, and any advice for others who are thinking of trying the vegan path?

JL-On a variety of frequencies, I want to live a life of conviction instead of desirable convenience.

My advice to anyone thinking about going vegan is to remember “IT’S NOT THAT DEEP.” People have it in their head that being vegan is “oh, so complicated,” time consuming, pocket-breaking, and political, but remove those stereotypes from your head.  Creating a vegan meal is not building a rocket ship from scratch.  It is a matter of having almond milk oatmeal instead of adding dairy milk.  It is making a veggie burger instead of a regular burger.  And there is this wonderful creation called the world wide web where one can simply Google “cheap vegan meal recipes,” “vegan recipes in under ten minutes,” “vegan lasagna” or anything to fit whatever culinary preference a person might have.  I am not saying it is easy to jump into a new lifestyle over night, but it’s like working out everyday, if you commit, it gets easier and the results of your discipline will be way more rewarding that the 5 minute satisfaction one gets from bacon.

For information on our 2017 VeganFlix Video Grant application Click Here